For some project I had the opportunity to look at H264 decoding and the hardware decoding using VAAPI. An ideal excuse to write a post on that subject...

This API is also usable directly with a DRM device, a DRI render node for example: very neat to offload the GPU decoding without a X server. You can also use it from Wayland of course.

The idea is to feed the GPU with a video stream (H264, VP9 ou MPEG) and the GPU will do the decoding and the rendering in a surface.

Decoding some H264 with the VAAPI

So I've started looking at how to interact with the API to do some H264 decoding. My goal was to take the H264 bytes, feed the GPU with it, and through the VAAPI get back an image. But of course things were not that simple, and I rapidly figured what I would have to code when looking at the sample programs. There were a lot of parameters to configure to interact with VAAPI: configuration matrixes, rates, ratios, numbers for many settings. There were at least 50 or 100 of these.

I though I could skip looking at how the H264 format is structured, but it seems like it is a requirement. The lengthy wikipedia page gives an overview of the format's complexity.

TLDR: The stream is splitted in NAL (Network Abstraction Layer). Some of these NAL contain decoding parameters, some others are slice with pieces of encoded images. For more details, you can have a look at that very good article and its friend (all the pictures come from there). 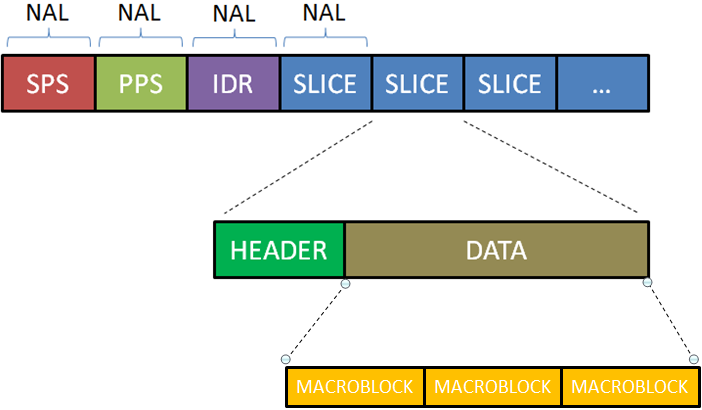 The VAAPI expect to be set up with the decoding configuration and be fed with slices. That means that you must be able to decode all the NALs, build configuration blocks. And then inject the slices to get complete frames. Basically that means doing the full H264 parsing down to the slice level. The H264 specification is so big that it seemed like a bad idea to me...

How do other projects do ?

When you have some work to do on a subject, it's usually a good idea to look at how the others do. So I gave a look at libraries that were doing some H264 decoding and one of the library I've looked at was ffmpeg. It decodes H264 and when looking at the documentation and the code I figured that it was able to use VAAPI to hardware accelerate the decoding. Lucky draw !

Ffmpeg's documentation gives examples to decode using VAAPI with command line tools, but nothing to do it programatically. My goal was to be lazy, I had already looked at the details of H264, don't tell me I would have to look at ffmpeg's internals ?

So in a lazy attempt, I've started by doing a trivial modification to directly use the right decoder:

Even with the last ffmpeg version it didn't work, I was getting a NULL pointer like if the decoder was not present. Anyway the compilation looked good and the ffmpeg command line tool was claiming to support VAAPI:

After some googling and watching at the ffmpeg_vaapi.c's code, I had to face reality: I will have to go deeper in ffmpeg than initially planed.

As explained above, VAAPI only do hardware acceleration at the slice level. That means that ffmpeg does all the H264 parsing and then passes the content to VAAPI for rendering. In the ffmpeg world that doesn't make a full decoder, as some architectures like VDPAU do all the decoding from H264 bytes to the rendering. From ffmpeg's point of view, VAAPI is just an accelerator and to use it you have to make your hand dirty.

The big steps are deploying a get_format callback:

If the returned format is AV_PIX_FMT_VAAPI_VLD, then ffmpeg will initialize the corresponding hardware accelerator.

Then you have to setup a get_buffer2 callback:

You have some tricks in initialisation routines, but the ffmpeg_vaapi.c file gives all the needed details.

VAAPI does the rendering in a surface but when you want to get back the bytes, you have to write a function that you will call once a frame is received:

And then you get H264 rendering done by the GPU !

During my tests, some ffmpeg version seemed to wrongly report the supported image formats. For instance with the 3.1.8 version, the YUV420P was reported as not supported while with the 3.3.1 it was (with the same underlying hardware of course).

A very interesting trip, there should be an applied implementation in FreeRDP in some time for some hardware H264 decoding.