Better late than never. Four years ago I was giving a talk on FreeRDS at the XDC 2014 and I was announcing that we would opensource the project at the end of the year. The opensourcing is finally here but in April 2018, you can observe a kind of delay !

So obviously lots of things have occured since 2014. First the project's name has changed: it was initially FreeRDS but the name was owned by one of the project's member. And our fork has diverged a lot, so there was the necessity for a new name. We thought at fireRDS, but we had some legal bothering with a giant company exploiting the name fire. So we've finally decided to take the name ogon (fire in russian).

Of course the project has gained some new features since 2014: * sound support with pulseaudio module; * support for multi-touch on all backends; * support for the egfx channel and h264 encoding (using openH264); * some implementations for clipboard and disk redirection; * for the Qt backend: hardware acceleration using DRI rendernodes, so that allows to have Qt applications done with QML; * and lots of other improvements...

The initial planned license was Apache 2.0 and finally we've choosen GNU Affero. So that server-side contribution have to be public too. When contributing, you have to sign a CLA (Contributor Licence Agreement).

Hey but what is ogon ?

TLDR; ogon is an RDP server for linux just like xrdp.

More precisely it's a framework to work with RDP under linux, that means that you have the RDP server and of components to publish application throught RDP, writing channels and interacting with RDP clients. Compared to Xrdp, ogon aims to implement all the new shiny RDP standards, leaving the old vector operations. It works on linux only for now, but it is designed to work on windows too. 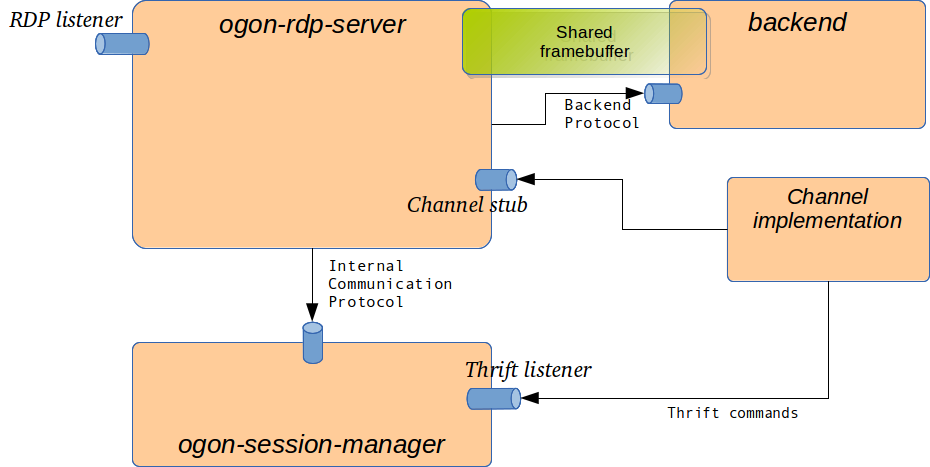 In the ogon framework, we have the following components:

Today we have 3 backends:

By design the ogon RDP server doesn't handle any vector operation, everything is done using encoded bitmaps. This has simplified the backend implementations that just have to share framebuffer with the RDP server. In worst case the server uses raw bitmap updates, but with most RDP clients it can use remoteFx or H264 codec which use a lot less bandwidth (but at the cost of more CPU).

Let's see what happens during a logon sequence to see how components interact:

I've simplified the launching of the X server, in practice it's more complicated as you have to impersonnate to the user and interact with systemd to get a correct environment, but you get the idea.

So this is just an appetizer. the ogon project is a framework to do some RDP under linux with lots of stuffs, I've shown only the basics. But now that the project is public, feel free to test and report.