Let's take a closer look at the RDPUDP protocol which will transport data over UDP. To begin with, remember that only channel data can be transported on top of UDP, so it doesn't affect older graphics orders (so forget speed up of bitmpUpdates with UDP), however it will work with any egfx transported graphics. The migration from TCP to UDP is done through the dynamic channel, so drdynvc is mandatory. This mechanism also allows static channels to be migrated to UDP by setting the TRANSPORTTYPE_UDP_PREFERRED flag in the gcc packet of multi-transport channel data.

The RDPUDP transport is negotiated on top of UDP and the transport format is defined in MS-RDPEUDP, this is the first version; MS-RDPEUDP2 is the "enhanced" version. A client or server must support a minimum of the 2 versions because we switch to RDPEUDP2 after having done a bit of negotiation with RDPEUDP.

RDPEUDP is the historical version, it allows to have a lossy transport and a reliable transport. In the lossy version, the top layer for encryption is DTLS, when the transport is reliable it is "normal" TLS.

RDPEUDP2 only supports reliable transport (and therefore the upper layer is TLS), version 1 and unreliable transport are doomed to disappear. In practice with a payload of 1232 and variable length headers it's almost impossible for an application to manage an unreliable transport except to have a very small payload (as when it's unreliable a PDU must fit in 1232 minus the maximum size of the headers in case you lose a packet).

Process of the negotiation and establishment of the transport

In the RDP negotiation, we are at the step where we have just finished negotiating the license, and the server sends the client a Initiate Multitransport Request PDU. The client then "connects" to the same address/port but in UDP: 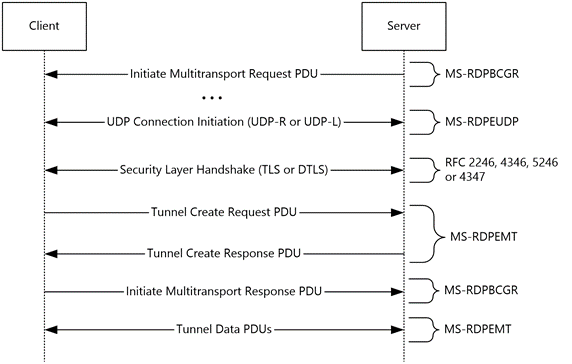 I use the expression "connects", but it will only be sending UDP packets since UDP is not a connected protocol. The customer will send a SYN packet which will contain, among other information, the maximum version of the protocol supported, and the server will respond with a SYN/ACK (SYN and SYN/ACK are to be understood as RDPUDP packets not as their equivalents in TCP) and the chosen version. 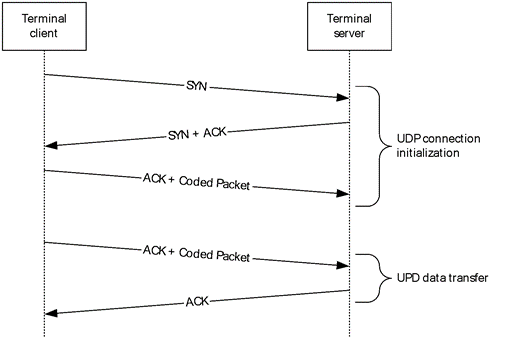 If the server responds with the RDPEUDP2 version, then we switch to an interpretation of the packets according to this protocol. Note that if the server takes some time to respond, you may end up with a server that has already responded (and therefore considers that it speaks RDPEUDP2), while the client returns the SYN packet thinking it got lost (and so upon receipt, the server will trash that packet because it's not a RDPEUDP2 packets. I experienced this case while debugging.

If you hadn't already guessed, UDP transport is very aggressive in terms of sending packets, and response times, you are literally overflowed by packets when debugging. Especially as execution is slower in step-by-step mode, you receive tons of packet retransmissions. Before limiting my implementation, I had a Out-Of-Memory killer intervention with the accumulation of UDP packets in the application which ended by eating all the memory.

For now, I only made the RDPUDP2 implementation being annoyed by the FEC in RDPEUDP. Version 2 of the protocol has learned from the first version: it is less complicated, but compensates by being more aggressive in resending packets.

I did notice a few deviations from the spec though and hope they will be fixed in the following releases (already reported to Microsoft):

During the development of this transport in FreeRDP it quickly became obvious that you need to have a way to decode the exchanged packets. I started by implementing a packet decoder program in FreeRDP that displayed the interpretation of the packet from wireshark's hex dump (so interpreting packets with added code in FreeRDP). Then I had FreeRDP dump the packets that were received, but given the volume (RDPUDP exchanges really a lot of packets), it quickly became impossible to search in the console. So I had the idea to write a dissector for wireshark.

When you want to extend Wireshark, you can do it in 2 ways: write a native plugin in C that will be part of the wireshark code, or write as a LUA plugin. I chose this second option because I needed to quickly decode packets, and also because at the beginning, I only planned to make a prototype and extract only the information that interested me. But features after features, I ended up with a plugin that decodes everything, it is even able to track the status of connections in RDPEUDP and RDPEUDP2, and even does PDU aggregation to reassemble SSL records.

The plugin code was pushed to FreeRDP in this pull request. With wireshark, it is convenient to be able to capture as a normal, non-root user, to achieve this, I followed the instructions of the wiki. Copy the plugin to $HOME/.local/lib/wireshark/plugins/, and normally you should see the exchanges in UDP on port 3389 decoded.

The dissector in LUA worked quite well, but I saw some issues when it came to decoding the SSL layer on top of the RDPUDP, I thought that these problems were coming from limitations in the LUA binding. So I decided to port my LUA plugin to a native dissector (in C) in wireshark.

Once done, my native dissector had the same problems as the plugin in LUA. But in the meantime I did some housecleaning and improvements on RDP decoding in wireshark: management of different types of channels (drdynvc, egfx), tracking and reassembly of packets for channels, a dissector for the multi-transport protocol. And finally with commit 8a1649c5a5ff7c8bdf38cbf54ed5138c1773bfd7 I found the problem between the SSL and the RDPUDP dissector.

After many refinements, including desegmentation support for RDPUDP, RDP decoding in wireshark over TCP and UDP are fully operational on the master branch.

To be able to decode TLS traffic, I used to patch my windows servers to force them to use combinations of ciphers without PFS (changes of various registry keys). I also had a crypto-weakened FreeRDP so that with just the server's private key, one could see the traffic in clear with wireshark. It was tedious and an operation to repeat each time, in addition the configuration in wireshark was always very painful (playing with "decode As").

During a conversation, I learnt that openSSL could dump its secrets via an API, and that if you record that in a secrets_file, wireshark is able to exploit it even to decode TLS1.3 with PFS (and no need to have the server's certificate). So I added this /tls:secrets-file:<path to file> option to FreeRDP which makes it possible to store the secrets of its SSL negotiations for future (or live) decoding of SSL sessions (on TCP or UDP).

In practice, you configure wireshark to fetch the secrets in /tmp/secrets_file.txt and you launch FreeRDP with:

And everything appears in the clear in wireshark, I've wanted to have this since years!

There's so much more to say about messages on dynamic channel, multi-transport, signaling bandwidth, so stay tuned !